GDPR X LGPD: the paths we have to go 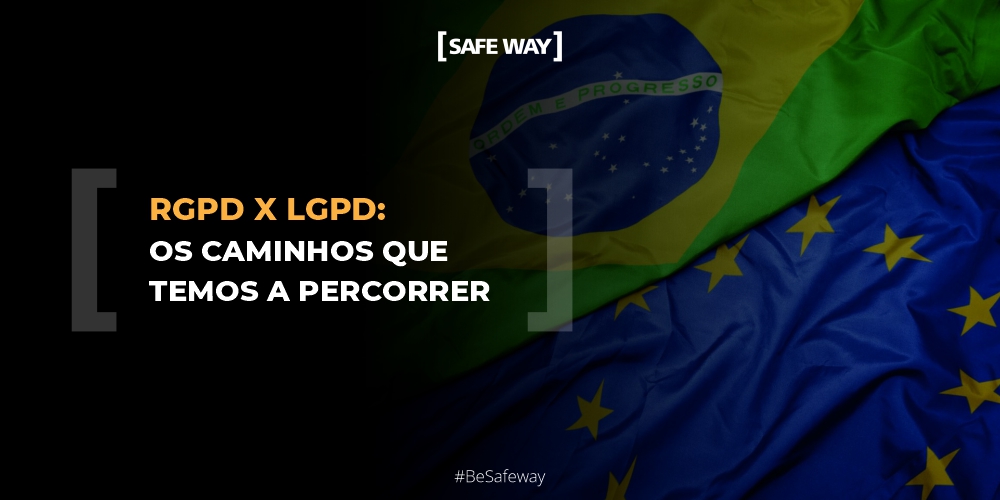 It is known that in 2012 the European Union was the bloc that took the forefront and started the discussion on data protection, which would become the GDPR, and that this Regulation became a reference for other personal data protection laws of other countries, including Brazil.

In Brazil, the General Data Protection Law - LGPD (Law No. 13,709/2018) was enacted on August 14, 2018. Its advent is the result of internal discussions about incidents involving data protection, such as, for example, the Carolina Dieckmann Law (Law No. 12,737/2012), which criminalizes the obtaining and misuse of personal data obtained through electronic devices.

In 2013, what became known as the “Edward Snowden scandal” over personal data exposure took place. Snowden was a technician at National Security Agency (NSA) and the CIA, American security and spy agencies, respectively, and revealed spy schemes and data theft by the Americans against the Americans themselves, countries such as Brazil and its president at the time, and representations of the European Union. This fact accelerated the discussion and implementation of the Marco Civil da Internet in Brazil (Law No. secrecy of the flow of your communications over the Internet and stored private communications, except by court order.

In 2015, it was reported that Cambridge Analytica had been collecting personally identifiable data through Facebook since 2014. This data was used to influence voters' opinions in several countries. The case gained greater notoriety in 2018 and further heated up discussions about the need for data protection and privacy.

Both apply to any company or person that processes personal data within their jurisdictions, the RGPD being within the European Union and the LGPD in Brazilian territory.

The definition of personal data – contained in Article 4 of the GDPR and in Article 5 of the LGPD – is similar and refers to information related to or referring to an identified or identifiable natural person.

There are nine principles of treatment and privacy in the RGDP, namely: Lawfulness, Loyalty, Transparency, Limitation of purposes, Minimization of data, Accuracy, Limitation of conservation, Integrity and reliability, and Responsibility. In the LGPD, there are ten, namely: Purpose, Adequacy, Necessity, Free Access, Data Quality, Transparency, Security, Prevention, Non-discrimination and Accountability. In addition, the Legal Basis for Treatment in the RGPD are six and in the LGPD there are ten.

In International Transfers of Personal Data, the GDPR imposes restrictions on the transfer of personal data to third countries, so specific agreements and adjustments are necessary for such sharing. In the LGPD, restrictions are also imposed, but the National Data Authority (ANPD) is still responsible for establishing transfer rules.

Regarding Penalties and Sanctions, both establish fines, sanctions and civil proceedings for controllers and operators, according to the type of event and severity.

It is notable that the GDPR is a more restrictive device with more details, since it has greater specifications and requirements, and is also highlighted by the responsibilities performed by the Data Protection Officer, which has its most well-defined role in it. It should be noted that it is reasonable for this to be more advanced, since it is a more mature regulation with more time for discussion than the LGPD.

Another relevant point is the need or not to prepare a Risk Assessment - also known as a Data Protection Impact Report - which is nothing more than an analysis of personal data security risks, that is, the activity of a particular company or person and the risks of data exposures inherent in that activity. Subsequently, the existing protection system is evaluated to verify whether or not there are vulnerabilities that allow the identified risk events to materialize.

However, risk assessment has been causing concern and confusion within the LGPD, especially for micro and small companies, due to the costs involved in this type of technical work. At this point, the GDPR defines much more clearly when this assessment should be carried out.

In addition, the LGPD left many spaces for the ANPD to monitor, which ends up demonstrating that the aforementioned instrument is not self-sufficient, requiring an inspection body to verify compliance with the law.

Finally, it is evident that the debate is very recent and will certainly need further maturity and adaptation, which will only come with time and a lot of dedication to the topic.

— Nathalia Soares is a Cyber Security Consultant Trainee at [SAFEWAY]